I don't know why I recently found myself looking at the "Goings On About Town" section of the issue of the New Yorker dated 26 May 1980, but there I was, failing to recognise the names of more than one or two of the bands playing at CBGB, and contemplating why the magazine, at that stage in its history, set the names of jazz musicians in bold type but not those of "pop" musicians or punk rockers, when something stopped me in my tracks: a listing, at a club called Hurrah (where DJs, the magazine said, spin "sides" by The Clash, The Specials and The Pop Group -- sounds like my kind of place), for Joy Division to play for three nights, Wednesday to Friday the 21st to the 23rd.
Upon reading this, a moment or two of cognitive dissonance ensued. Things slowly came back into focus, and it dawned on me: that never happened.
The New Yorker, I thought to myself, at least these days, is cover dated a week ahead, which suggests the presses would have been running in the evening of 18 May. The first day for that issue's listings section was 19 May. In the early morning of 19 May 1980 Ian Curtis committed suicide. I was looking at a strange and morbid kind of historical artefact: if the magazine had come out a couple of days later, or if Curtis had taken his own life a couple of days earlier, the venue would presumably have rescheduled those nights' gigs in time for the listings to have been changed, with Joy Division's name removed.
One always hears that Curtis's suicide occurred "on the eve of their American tour", but what this discovery brought home to me was how literally that was the case.
Here is the page. (Click to enlarge.) I find it kind of creepy to look at. It is like sneaking a glimpse at a future that never was. 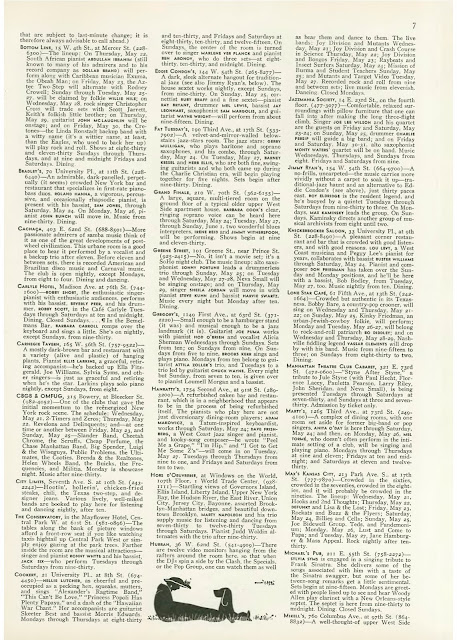 (For what it's worth, there would still have been plenty of music to catch that week: what must have been a very early gig by Mission of Burma (also at Hurrah), Defunkt at Max's Kansas City (and also, with Nona Hendryx, at something called the Squat Theatre -- that's where I would have been, man), John Cale, also at the Squat Theatre, the "Velvet Fog", Mel Torme, at Marty's, Kinky Friedman or Bo Diddley at the Lone Star Cafe. Meanwhile, Sun Ra was flying in from Saturn to entertain us, and Jonathan Richman and James Brown, in their respective 1980 incarnations, both had gigs at Irving Plaza. (It might also have been nice to squeeze in Mongo Santamaria, at the Village Gate, although I have no idea where his head was at in 1980.))
Posted by stan at 5/06/2010 07:23:00 AM